The Bantams’ apprentices overcame the blow of having to play 65 minutes with only ten players to deservedly defeat Barnsley and book a date with Liverpool in the F.A Youth Cup third round.After dominating the early stages of the second round match, City grabbed the lead eighteen minutes into the first half through Reece Webb-Foster.Just seven minutes later, however, City’s youth team were dealt a blow when Joe Brennan was given a straight red card for a push to the face on Barnsley defender Mason Holgate.

The red card meant the Bantams had to endure large periods of the time left in the tie defending their goal but they did so with calmness and composure, limiting their opponents to very little.

The Bantams then made sure of victory with only three minutes of normal time left when substitute Jack Waters headed home City’s second.

The victory books City a trip to footballing giants Liverpool, although that unfortunately is no certainty of a trip to Anfield.

The Reds are one of a number of Premier League clubs to have received approval from The F.A to play their home ties up to the fifth round at an alternative venue, meaning Liverpool could decide to play the tie at their second ground of choice – Langtree Park – the home OF Super League champions St Helens.

During a purposeful start to the Barnsley tie, City could have took the lead as early as the third minute when visiting ‘keeper Danny Rusling surged out of his area to try and deal with Callum Chippendale’s long clearance forward but missed the ball.

Dylan Mottley-Henry used his pace to rush onto the ball but his first time effort from a tight angle missed Barnsley’s gaping goal and instead went wide of Rusling’s near post.

Webb-Foster was the next to trouble the visitors when the forward warmed the hands of Rusling with a drive from the edge of the box in the seventh minute.

The game was still less than ten minutes old when City had another scoring chance through Mottley-Henry.

Webb-Foster managed to prevent Holgate from seeing out James King’s ball over the top before the striker cut the ball back from the byline for the waiting Mottley-Henry.

The winger side-footed for goal but his effort from straight from deep inside the area was at Rusling.

With City still on top at this stage, Brennan twice went close to finding the target. Once with a drive that went across the six yard box and then with a header that flashed wide of Rusling’s far post barely twenty seconds later.

City’s dominance in the tie paid off in the eighteenth minute when Webb-Foster fired the Bantams’ apprentices into the lead.

The striker displayed a great touch to bring down James Pollard’s forward pass inside the area before slipping the ball past the on-rushing Rusling and just inside his near post.

The balance of the game threatened to change in an instant, however, when Brennan was dismissed after 25 minutes for an apparent push to the face on Holgate during an off-the-ball altercation with the Barnsley defender.

Brennan’s red card naturally nullified City’s attacking threat to a certain degree but they were still looking relatively comfortable in the tie as time ticked down towards the break.

Barnsley’s best chance after Brennan’s dismissal was limited to a speculative effort from all of 30 yards out by Holgate that bounced wide of Elliott Barker’s far post.

Bradford-born Talent Ndlovu looked to pose a problem to the City defence on the stroke of half time when he turned away from Ross Kershaw just inside the box but the winger’s cross-come-shot was held by Barker at his near post.

City had made it to the interval with their lead intact but Barnsley engineered a decent scoring chance with less than ninety seconds played after the restart when James Bree latched onto Matthew Templeton’s low cross from the byline.

Bree’s strike for goal found the feet of 15 year-old Louis Wardle, who flicked a first time snap-shot over the bar from around the edge of the six yard box.

Given their one-man advantage, Barnsley were enjoying the lion’s share of possession as the half progressed but they remained unable to break City down.

Despite the ball mainly being in their half, the Bantams were actually able to still create a chance or two of their own when possible early in the second period.

A forceful run from Sam Wright just before the hour mark eventually teed up Webb-Foster for one such chance but the striker’s effort from just outside the box flashed wide of Rusling’s far post.

On the whole though, Barnsley were remaining largely dominant on the ball due their extra player and the Bantams were having to sit in to protect their lead. Templeton tried his luck from the edge of the box with one opening for the visitors twenty minutes from the end but his low drive was held by Barker.

Substitute Mohamed Saeed then set up Sam Hanna for a shooting chance inside the box roughly a minute later and the midfielder’s angled drive flashed across goal, narrowly wide of Barker’s far post.

Barnsley looked to have possibly found a way through thirteen minutes from the end when skipper Bailey Gooda’s teasing cross made its way to the edge of the six yard box but Holgate headed over from a decent position in the middle.

Shortly before Holgate’s near miss, City made their first substitution of the night by replacing Webb-Foster with Sumaili Cissa after the Bantams’ goalscorer seemed to pick up a knock making a clearing tackle.

Cissa was involved in the action almost straight away when team-mate Mottley-Henry found him in space just outside the Barnsley box on a City counter-attack. Cissa tried to turn into shooting space but eventually elected to lay the ball off to the waiting Wright, who fired over from around 20 yards out.

The chance was a welcome respite for the Bantams but Barnsley were back threatening again with seven minutes of normal time remaining. Holgate twisted and turned his way into space before feeding Wardle into a pocket of space just inside the area.

With City defenders gathering around him looking to close the young attacker down, Wardle attempted to lift the ball over the advancing Barker’s head but the effort dropped over the bar.

City made their second substitution of the night shortly afterwards, bringing on defender Waters for Chippendale.

Waters was seemingly brought on to help City see out the game with their one-goal advantage still intact but he incredibly went one better in the 87th minute to double the Bantams’ lead.

Following Mottley-Henry’s hanging cross towards the far post, Waters attacked the ball with purpose and his looping header dropped over Rusling and into the far corner.

Barnsley engineered a couple more half chances in the few minutes that remained but City hung on for the prize of a clean-sheet to go with their victory and a date with the Merseyside giants. 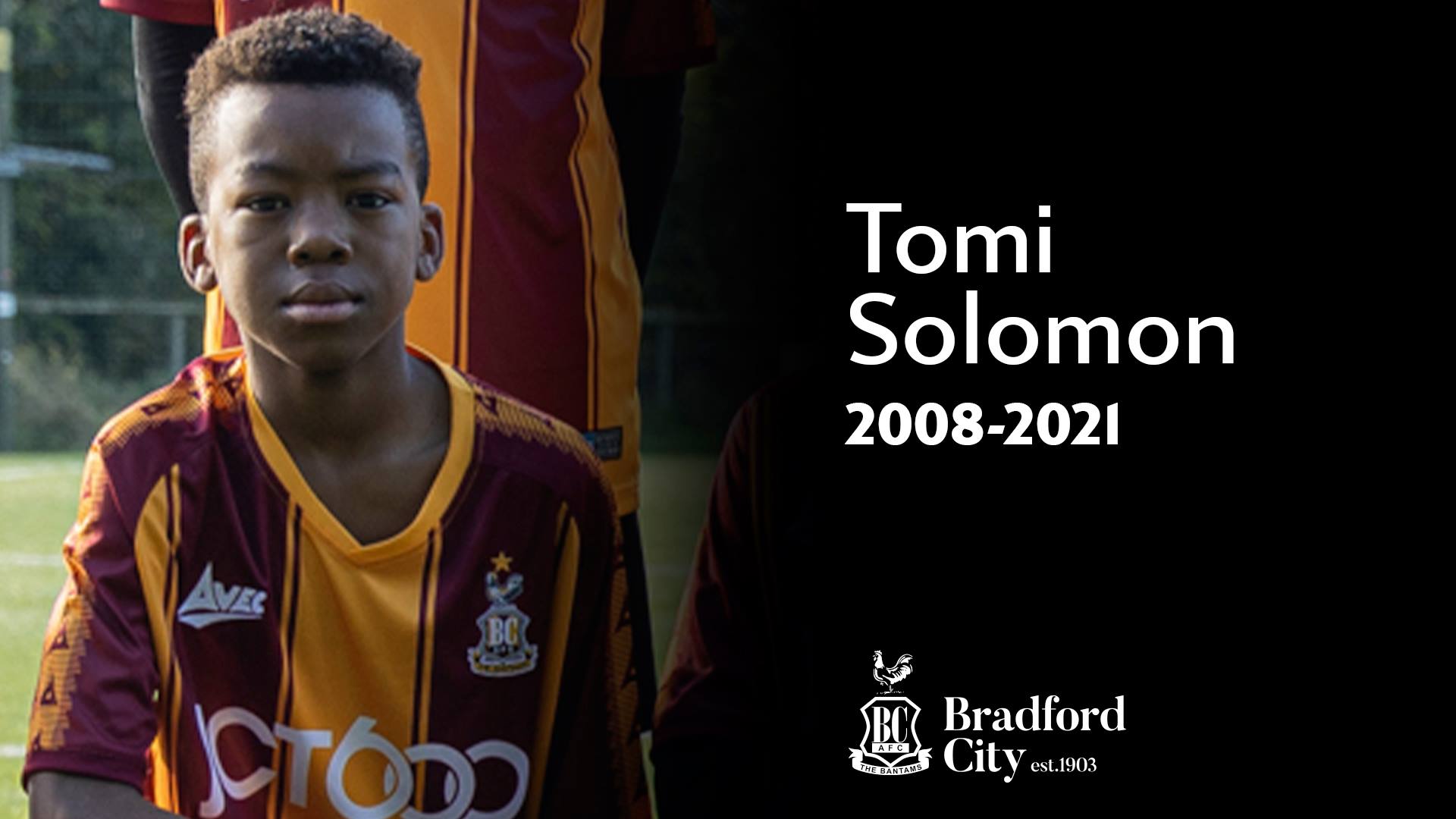 Bradford City AFC is mourning the loss of academy player Tomi Solomon, who has tragically passed away.  Solomon represented City’s under-13s side, having spent the past three seasons with the Bantams.  The thoughts of everyone at the club are with his family, friends, team-mates and loved ones at this difficult time.  City’s academy manager, Neil…