With a scheduled 9-10 am flight out of Manchester airport to Amsterdam we met at Woodhouse Grove School for the coach transfer at 5-15am with a pick up on route at Hartshead Moor Services due at 5-45am. When it got to 6-30 am and no coach to be seen we then started to think we need a plan B. We quickly got the keys for the mini bus and set off ,ringing for 3 taxis on the way for the lads at the service station. With a 8-15am deadline for the flight to check in we thought it was going to be touch and go as the build up of traffic on the m62 started getting worse. By a miracle we managed to get there at 8-10am and proceeded to check in. Sat in the departure lounge an announcement came over the tannoy saying that due to thunderstorms over Amsterdam the flight was delayed. We eventually took to the air at 1-30 pm. We were met by our travel representatives in Amsterdam and transported to our Hotel in Horst which was a 2 hour journey south. After meeting at 5-15am,13 hours later we checked in to our hotel in Horst. After a welcome meeting and going through the health and safety briefing we sat down for dinner, after which we went for a little walk and then retired to our rooms to catch up on some much needed sleep in preparation for tomorrow’s schedule. Overall after starting the day badly we at least managed to travel which is more than can be said of the Sheffield United party that were due to fly out later in the day but found out their flight had been cancelled only having to return on Tuesday morning for another flight.   Don’t forget to log on tomorrow to check out how the lads got on during day 2.

York City U18s 0 –  Bradford City U18s 5 This weekend, we travelled to York City in search of our first away win of the campaign. We looked to continue winning ways, after securing our first win of the season against Mansfield Town last Saturday. Despite the heavy rain, we settled into the game and enjoyed all of the possession in the opening minutes.  A comfortable start saw us take…

Just a reminder there is no training for the U7s Development Centre Group tonight. 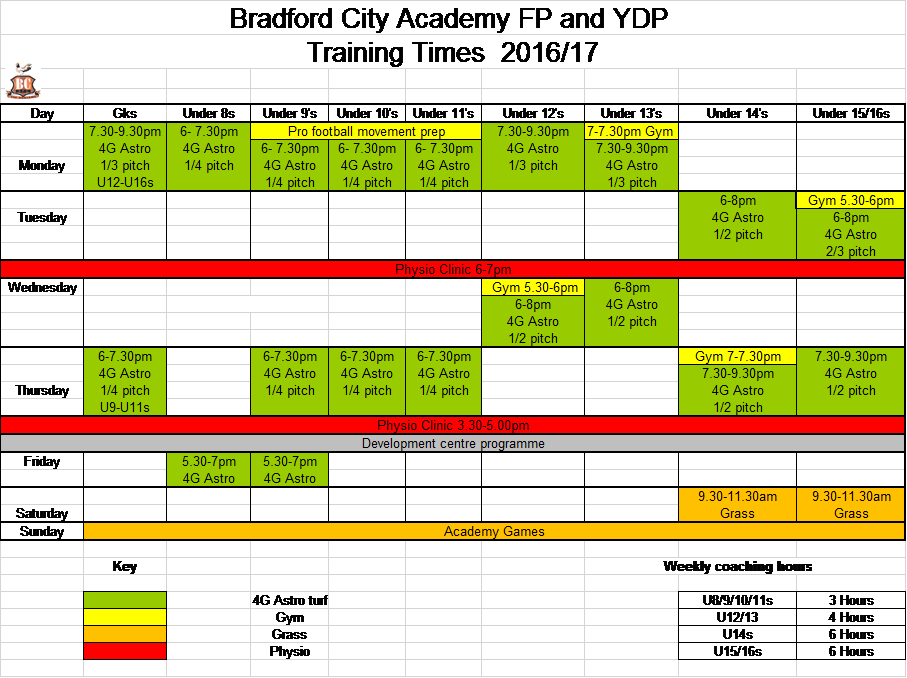 By Sinead Cunningham As our usual home pitch, Rawdon Meadows, is out of action due to the floods we travelled up to Maiden Castle, Co Durham this weekend for our fixture v Hartlepool United. Having started 2016 with a 1-0 win over York City (9th Jan), we were pleased to make it two on the bounce…